skip to main | skip to sidebar

The Boy In Pink Tennis Shoes - and other snapshots from Haiti

I arrived home last night from a great month in Haiti. I can honestly say that I "left everything I had on the field" on this trip. We finished surgeries very late Friday evening, and I was at the airport in Haiti at 6:00 am Saturday morning. Memories from this trip are kind of cloudy due to the length of the trip along with sort of an emotional protection. I saw so many things that no human being should have to endure on this trip it is mind boggling.

Some of the memories include:

The flight attendant on the Haiti to Turks and Caicos flight announcing "in the likely event you need a life preserver..." Granted, it was one of those things lost in translation, it still made me pause. I like the definition of faith that it means willingly placing ourselves in situations that are so desperate, only God can provide the way out. Living a life of true faith means it is very likely we will need the life preserver.

Sitting outside the consultation room one day, I watched a teenage boy walk by. Neat and clean, chatting happily with his friends - Wearing pink and white Nike running shoes. Obviously shoes intended for the other gender, but cherished and worn without shame by this good looking kid. It's funny how our priorities are changed by our circumstances.

One of the teachers at the secondary school at the parish, Williams, had asked me to meet with him while in Haiti. At one point early in the trip Williams had brought his father in law into our ER after mistaking him for a burglar one night and beating him severely with a club. As dark as the nights are in Haiti, this type of thing is a pretty frequent occurrence. I was finally able to meet with Williams, and heard a great proposal to restart a computer training program at the school. They had two old computers (for over 200 students) that are now beyond repair. They are hoping for a donation of 4 or 5 computers to restart the program. I will write more on this later.

A man came to us in March requesting a hernia repair. He even went ahead and paid in advance for the surgery. No surgeons have been willing to do the repair due to the size of the hernia - Think small watermelon. God called Dr. Jo V J. Dignadice to come to Haiti for a couple of weeks. She took a look at the 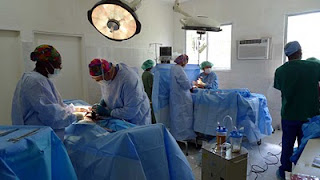 patient and said "no problem". After opening up the patient she found several feet of bowel herniated, and was able to successfully repair the hernia during a 3 hour procedure. She even "happened" to bring along some surgical mesh, which allowed the surgery to even be possible. The patient is doing well. Due to the number of cases, we had doubled up tables in the OR to speed things along before we started this case. This allowed us to complete all of our scheduled general anesthesia cases for the week.

It has taken me a week to recover from last Sunday. I made 3 separate trips in the ambulance with critically injured accident victims. As I pulled into the government hospital with the second patient, I was stunned to see someone wheeling out a corpse, wrapped in blue plastic, on a 2 wheel hand cart. The patient I was delivering was a 6 year old little boy that had been hit and then run over by a truck. With a fractured arm and hip, and missing a lot of skin and muscle over his buttocks as well, he needed surgery fast. As usual, the family did not have the funds to pay for the surgery. Your support allowed me to assist them financially in getting him registered, medicated, and scheduled for surgery. Unfortunately, the x-ray department had decided to close so he would have to wait until Monday morning for his surgery. He was placed in a bed next to a naked, horribly injured, dead man. When I returned with the next patient 4 hours later, neither he nor the dead man had been moved. There were so many traumas there Sunday night, my shoes were sticky from wading through all the mixture of blood when I walked out.

On Thursday evening, while sitting on our hospital steps, a middle aged Haitian man stopped to visit. He had some small tourist boxes that he was trying to sell. As he explained to me that he had to sell some to get some food for his family - I believed him - It killed me to tell him that I had no money. As I said I left everything on the field this trip. I had exactly enough cash left to purchase my plane ticket on Saturday. I wish I could tell you that I acted on faith, bought some of his boxes, and helped him feed his family that day. I didn't. I was so emotionally spent that I couldn't imagine risking not being able to not going home.

I am praying for this kind of faith. The kind of faith that tells Jo V and her sister to travel to Haiti for reasons they don't understand, and with barely enough funds to even get there. Trusting God to get them home.

The flight attendant then went into the next part of her spiel, saying "in the likely event you need oxygen...". God, help me to live life in such a way that I will need you to preserve me daily and provide the very air I breathe.

All Things Are Possible