skip to main | skip to sidebar

Piti Piti N'Arive - Little By Little We Get There

The above Haitian proverb is so appropriate for virtually any work in Haiti. Haiti's problems, much like the challenges and overweight person faces, did not appear overnight. In the same way, solutions, progress, reform, and healing are very much a continuum. How do you explain the street children that spurn a warm bed in a children's home for a life on the streets? How else can you explain the culture's complacency to the corruption and resulting oppression they face each waking moment? Perhaps worst of all; how do you explain their complete acceptance of living in such desperate - even intolerable conditions? They truly see each minuscule sign of progress as truth of the proverb.

This was brought home very hard this week with the death of a man as I previously wrote about - Then just through accepted medical practice, we were able to save the life of the next asthma victim,who was in even worse condition. For the Haitian doctors, it bordered on the miraculous. In reality it was simply practicing good medicine; with God's blessings. Perhaps of most importance, was having the opportunity to teach the Haitian doctors how to use the right drugs, in the right amounts, at the right times to reverse the acute asthma attacks. Unfortunately, aerosolized Albuterol is not available to dispense in the North of Haiti, which could so easily prevent many of these attacks from occurring in the first place. Still, I am convinced that this is why God placed L'Hopital St. Francois de Sales in the middle of nowhere. Without it, these people would have no other options when death knocks on their door.

God allowed some amazing progress in our work this week. While Dr. Ken White and his team were visiting from Wilmington, NC, we were doing so many surgeries that we began to run low on our inhalation 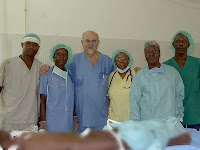 anesthesia drugs. This was critical as these can not be purchased in Haiti. We visited a friend of mine, Dr. Ernst Jazzmin who is the Director of Health for the Nord region of Haiti. We explained our dilemma - and offered to donate an anesthesia monitor that their team had brought with them. He made a couple of phone calls, wrote us a note, and we were on our way to the government hospital to pick up more medicine than we needed. While there, we were able to make friends with Dr. Marie-Carmelle S. Laconte, who is in charge of the operating room. After the NC had left, we still had several cases requiring general anesthesia: But no anesthetist. I again visited Dr Laconte, who happily loaned me a very capable anesthesia resident along with a nurse training for anesthesia - At no charge! If you don't understand the Haitian culture, there is no way to explain what an incredible breakthrough this is. Additionally, Dr. Laconte arranged for my currently visiting urologist, Dr. Sandro Visani, to use their operating room to perform numerous prostatectomies for which we are not equipped at St. Francois de Sales. Only God can foster this unheard of cooperation between Haitian government hospitals and a "competing" private hospital. After spending the first few months in Haiti I would never have thought something like this could occur. Piti, piti n'arive!

We were able to travel to the DR for the weekend to enjoy a hot shower, air conditioning, and electricity. Even though it is an absolute Caribbean paradise outside my door, I have rarely left my room. I am getting a lot of much needed rest and prayer time alone. I did go out to relax in the hot tub yesterday evening, and was surprised to hear the couple there speaking Kreyol Haitian. As we struck up a conversation, I learned that the Husband, Peterson, studied electrical engineering and administration in the DR, and was one of the very few who chose to return to Port Au Prince after completing his education. As I talked about the vacant hospital there that I am scheduled to visit this week in hopes of opening, he said he has 4 friends that are US trained physicians in Port that don't currently have a hospital to practice at due to the earthquake's devastation. Something tells me God is about to make me tremble again - In fact the trembling began as he expressed the desperation for care that currently exists in Port, and the hope that we can open the hospital. He and his wife who are both Christians volunteered to do anything possible to assist with the effort. They tell me there is currently one large hospital serving all of Port Au Prince. A simple lab test or X-Ray requires standing in line for a full day. 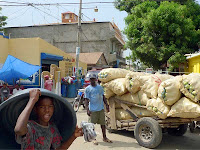 Throughout Haiti you see men manually pulling massively overloaded carts. Eyes glazed with fatigue, yet sheer determination flowing from them. Muscles bulging and straining. Wheels and axles creaking. It is a heartbreaking sight. It so reminds me of how Jesus must have looked when carrying His own cross. As I pick up my cross daily here in Haiti, it is so reassuring to know beyond any doubt that He is guiding me, and the He is putting the people, relationships, and facilities in place that will allow Him to use us to serve His people. All glory to God.
Grace and peace,  Randy
Posted by Randy Moore at 7:58 AM

All Things Are Possible